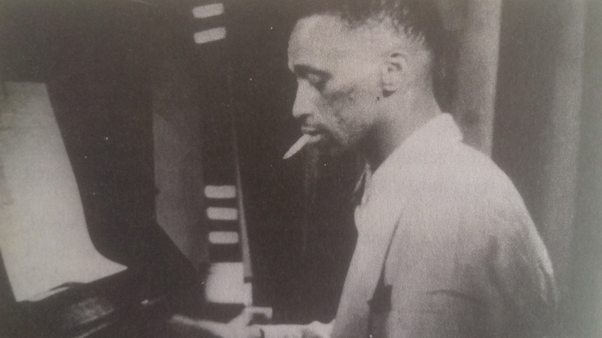 Pic of Sam Maile from the archives

The township lad whose purples prose turned Zonk! Magazine into a hit

Sam Maile is a hidden chapter in the history of South African music. The neglect is particularly mindboggling if one considers the sheer weight of his artistic and intellectual contribution to the cultural scene. Both South African jazz and choral music are richer thanks to his selfless input. His trailblazing role as a chronicler of the early years of South African jazz and its pioneers challenges what is currently in the history books. As a jazz commentator and reviewer of jazz records, he profiled key figures such as Todd Matshikiza long before the Queenstown-born pianist and composer became a household name in jazz and journalism.

He was deputy editor and one of the original writers on the staff of Zonk! the first magazine targeted at African readers two years before the launch of Drum in 1951. Therefore the popular narrative that Drum was the first publication for black audiences is incorrect. The Music Box, his column in the magazine’s entertainment pages was an institution – a fountain of fascinating jazz history and its personalities written in an engaging, insightful and entertaining style. His sagely reflections on these matters were richly informative and intellectually stimulating with a conversational tone that could effortlessly grip the reader’s full attention.

“Do you remember the Dark Town Strutters? Perhaps you do. But if you don’t, let’s take a glimpse into the past and think of those ambitious young men of the early twenties who invaded the African stage with their ragtime and mimicry of greater, luckier men of the Layton and Johnstone and Ted Lewis type,” he wrote in a profile of the Dark Town Strutters, one of the country’s earliest vocal jazz ensembles long before modern stars such as the Manhattan Brothers and Miriam Makeba arrived on the scene. The other names refer to some of the popular American entertainers during the roaring twenties and reflect the long-standing relationship between jazz musicians on both sides of the Black Atlantic.

His jazz writings are a minefield of nuggets and one of those nuggets is a piece on Emily Koenane, the first lady of the blues who trailed a blaze for illustrious female performers such as Dolly Rathebe, Dorothy Masuku and Sophie Mgcina. The empathy and foresight with which he often approached his jazz portraits is evident in the Emily Koenane story. “Emily is one of the many stars in the latest all-African musical revue film, Song of Africa, in which she does a little singing, and we hope the day will come when she will win a very big part in some musical production and thereby realise her life’s ambition.” This songbird went on to tour and front great orchestras of the forties such as the Jazz Maniacs.

A rising star in the performing arts

Sam Maile was born in Doornfontein, Johannesburg to Wilhemina (née Mabelane), a schoolteacher who originally came from Mmakau in the Brits area. His father, Timothy Maele was a clerk in the city and came from Ga-Maele, a village on the Botswana border. A spelling error or deliberate distortion by some white bureaucrat at the pass office resulted in the current spelling. His early schooling was at a Dutch Reformed Church school at Prospect (Eastern Native Township), an old location in the George Goch area where the family had relocated.

Nicknamed Clipper Island, the township is renowned for having produced influential musicians like Miriam Makeba, Khabi Mngoma, Kippie Moeketsi and Godfrey Moloi, a trumpeter who later became actor and businessman, the godfather of Soweto. In 1937 Maile matriculated at the famous St Peter’s in Rossentenville, Johannesburg where his classmates included Oliver Tambo and Jacob Moeketsi, pianist and Kippie Moeketsi’s elder brother.

In 1950 he wrote the following about Kippie and his family: “Jerry “Kippie” Moeketsi plays clarinet and alto saxophone, and of course he is an outstanding musician although he does not know it. He just goes on playing because he earns enough kudos from it. The Moeketsi family is a remarkably musical and I don’t wonder at him for being the great instrumentalist that he is. One outstanding feature about his playing is his whirlwind style, which he manages with such mastery and sweetness. His technique and fingering are unique, and seldom get lost. Maybe he is too sensitive – will not allow a few notes to pass by without being able to account for them.

“Although he plays just as well on either high or low register, I like him better on the lower scale. I do not agree with those who say he is the most talented of his family, because I know one or two men in it who can be mentioned with ease. Kippie has more push and moral courage, which characteristics have somewhat singled him out.” No prizes for guessing which other brother he could have mentioned with ease. Jacob Moeketsi was a versatile pianist in both classical and jazz music. His career as a musician goes back to the forties when he played with big bands, notably the Harlem Swingsters.

He obtained a teaching diploma at Gore-Browne Institute, an Anglican mission college and teacher’s training centre in Kimberley, Northern Cape. One of the students there during his time was Boyzie Gwele, later to become an influential pianist in his own right on the South African jazz scene in the fifties. It’s unlikely that he taught for long if he did because he later went to Fort Hare where he obtained a degree in music. In the early forties he was a member of the South African Native Military Corps that participated in the war effort against Nazi Germany. At the behest of a military lieutenant, Ike Brooks Baruch, he was assigned to put together an African jazz band to perform for the Allied forces in Egypt and other parts of North Africa.

There he played with world-class musicians like Tommy Dorsey and Glenn Miller, big band leaders of the swing era who were also involved in the war effort as entertainers and morale boosters. Miller’s recordings like In the Mood, Chattanooga Choo Choo and Kalamazoo were not only big on the American hit parade, but later became swing standards that gained huge popularity among South Africans. They were the staple of local swing bands, particularly Peter Rezant’s Merry Black Birds. Sam Maile’s exposure to top-drawer performers from the West like Miller earned him respect and recognition. The western media christened him the Johnny Hodges of South Africa.

Some of the band members he performed with on the war front were later absorbed into an orchestra that performed in the revue and film both titled Zonk! Both were Ike Brooks Baruch’s productions. The film version was released in 1950 and featured an array of African singers and entertainers such as Daniel Lekoape, Sylvester ‘Skip’ Phahlane and Richard ‘Schoolboy’ Majola, the country’s answer to Fred Astaire. A year before moviegoers watched Jim Comes to Joburg (1949), the first film with an all-African cast and a storyline based on the black condition with Alexandra as the setting. It starred Dolly Rathebe and Daniel Adnewmah, a Nigerian-born crooner whom later taught at St Peter’s.

Maile played a key role in both pioneering screen productions as composer, bandleader and performer. At this stage he was a highly regarded composer of African songs and choral music. He was also blessed with a deft hand in composing for symphonic and jazz orchestras. One of his compositions, Tlhapi Ke Noga (A Fish is a Snake) was made famous by Dolly Rathebe. Recorded in 1954 by Gallo, the Setswana blues-inflected ballad features Maile on piano, Kippie Moeketsi on alto, Mackay Davashe on tenor, Jacob ‘Mzala’ Lepere on bass and Willie Malan on drums. Songs such as Polina was a favourite of school choirs and one of the staples at eisteddfods. uNozizwe, also sung by the queen of the blues, was written in isiXhosa and reflected the composer’s flair for languages.

He also wrote Re Entseng MaAfrika? (What Have We Done, Africans?), a protest song. Its Nguni equivalent, Senzeni Na?  is an anti-apartheid elegy that has been sung at political funerals and rallies at least since the fifties. From the sixties and subsequent decades he initiated a number of bands and groups in his capacity as producer and talent scout at Gallo and EMI – with a specific focus on developing the homegrown sound called marabi or saduva. The latter refers to an old Xhosa song made popular by Miriam Makeba. He had an influential hand in the rise of popular mbaqanga and soul outfits such as the Mahlathini and Mahotella Queens, the Dark City Sisters, the Flaming Souls and Teenage Lovers – to mention a few. One of his ensembles, the Jazz Crusaders was formed in Diepkloof in 1962. Sam Maile was a huge but unacknowledged talent, a trailblazer of the arts and scholar who deserves better recognition for his role in the promotion of indigenous music and jazz.

Sam Mathe is a South African journalist, writer and publisher. He is a founding editor and publisher of Jazz Life Magazine as well as contributing author of South Africa’s Greatest Entrepreneurs (MME Media, 2010) and Brenda Fassie: I Am Not Your Weekend Special (Picador Africa, 2014). Mathe has contributed widely on a number of South African newspapers and magazines including Drum, Mail &amp; Guardian, The Star, Sunday Independent, Sowetan and Rapport. He is a specialist writer on South African cultural history and heritage. Mathe is the 2018/2019 uncontested winner of the Literary Journalism Award at the annual South African Literary Awards.