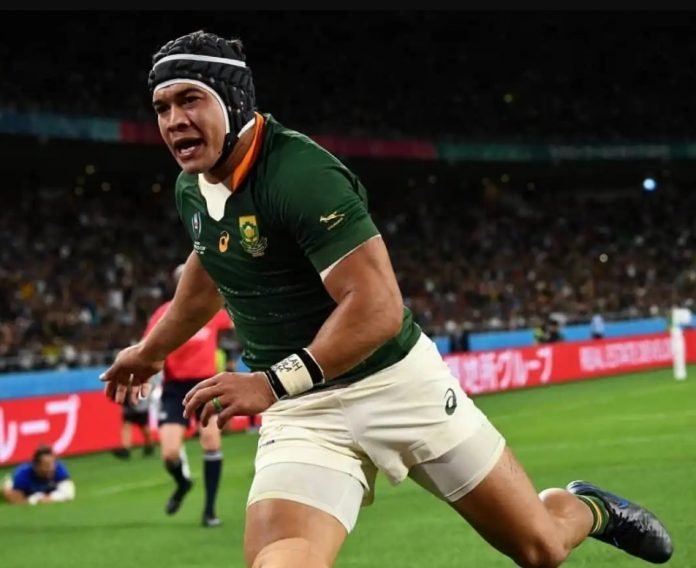 As one of the hottest properties in rugby union, South Africa’s Cheslin Kolbe has made his mark as a free-roaming winger with lightning footwork and a sprinter’s acceleration.

As one of the hottest properties in rugby union, South Africa’s Cheslin Kolbe has made his mark as a free-roaming winger with lightning footwork and a sprinter’s acceleration.

Back in the Springbok team for Saturday’s Rugby World Cup final against England after missing the 19-16 semi-final win over Wales with an ankle injury, Kolbe said he was instead primed for an aerial battle in Yokohama.

Teammate Faf de Klerk dominated proceedings against Wales, as the two sides kicked the ball an incredible 81 times over the 80 minutes, deploying a kicking game backed by a pressing, aggressive defence that tries to force opposition errors.

“I obviously do enjoy running with ball in hand, but the game has really differed in the last couple of months in terms of being more aerial, battle-wise,” said Kolbe.

“There are structures, plans put in place,” continued Kolbe, who said he was looking forward to coming up against Jonny May — “He has got a lot of wheels!”

“If you wear that jersey, it’s whatever it takes to wear it and give the best on the field, whether it’s chasing up on a kick, on defence or running with the ball in hand.

“It’s just going to be whatever it takes to make it work and make sure the team benefits at the end of the day.”

Prior to the semi-finals, Kolbe had underlined his credentials as one of the stars of the World Cup with a series of blistering performances that lit up the competition in Japan, wowing fans to become one of the most recognisable faces of the tournament.

In a game increasingly made up of giants, Kolbe, standing a diminutive 1.72m (5ft 8in) tall and weighing in at a relatively paltry 80kg (12st 8lb), relies on his speedy footwork and an ability to use his power-packed stature to ricochet his way out of contact situations.

Makazole Mapimpi has demonstrated equal ability on the left wing for South Africa, with five tries to his name in the competition.

Kolbe comes back into the starting XV in place of S’Busiso Nkosi, who also played well against Wales, but misses out on the match-day 23 in coach Rassie Erasmus’ sole change from that last-four clash.

“It’s definitely been frustrating, especially coming through the pool stages and getting injured against Italy probably in the last seconds of the game,” said Kolbe, cousin of South Africa’s world 400m record holder Wayde van Niekerk.

“I’ve been training with the team for the last two weeks. I’m really confident that as a player I’m back to my old self, the ankle has really healed up nicely.

“I’m really confident, I always give my 100 percent. I’ll never go out on the field when I’m not 100 percent because that’s just selfish as a player.”

Kolbe, who enjoyed a breakthrough season with Top 14 champions Toulouse last season, added: “I’m just grateful to get another opportunity to wear the green and gold jersey and to play in the final.”