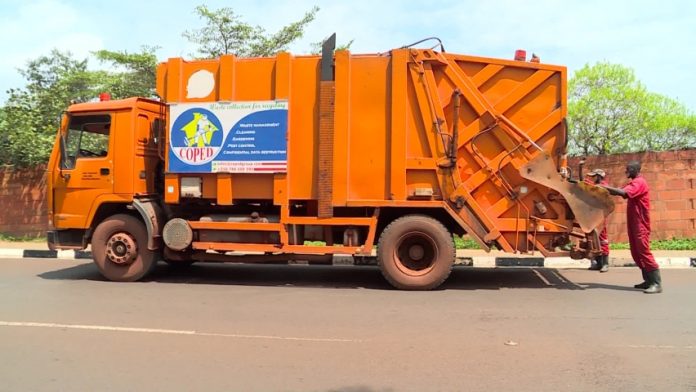 Over the years, the City of Kigali has revelled in the excellent reputation of “clean city”; a tag that is hard to put on many developing countries. One of the reasons behind this success is the government’s ban on plastic packaging materials.

Despite the COVID 19 measures of social distancing that put “UMUGANDA” on hold, The other is the government initiated monthly community service Umuganda, where ordinary Rwandans and leaders alike take time off every last Saturday of the month to undertake different community-based projects geared at keeping the nation clean.

The third and probably least highlighted link in this chain is the vast army of female cleaners who ensure that whatever little garbage makes it to the streets and public spaces is gotten rid of immediately.

These are the unsung heroes behind the country’s hard-earned reputation of cleanliness, the members of our community, who very few people hardly ever recognise.

Dorothy Mukamwezi is one such unsung hero who boasts five years of experience as a cleaner for the Kigali city. Like most of her fellow cleaners, she is affiliated to a cooperative, Mukamwezi expresses a passion for her work from which she derives immense satisfaction. She explains that her brief is basically to keep the city not only clean but also green. Mukamwezi is quick to point out that things have not always been this way.

Mukamwezi, however, says that as recently as five years ago, the situation was a far cry from what we see today. “Five years ago, the cleanliness in the city wasn’t very impressive. People used to throw garbage along the roads, and even those in charge of the general cleaning weren’t as passionate and dedicated as those of today,” she explains.

Mukamwezi confesses that ever since she got hold of a broom to contribute to the city’s beauty, she has enjoyed every minute of her demanding job. “I take great pleasure in doing this job of making the city clean and green; it makes me confident that, just like other patriotic citizens, I’m contributing something to the development of my country,” she says.

For Aline Vuganeza, there is nothing more fulfilling than the compliments that Rwanda receives as a nation and Rwandans as a people for the cleanliness record. “When foreign people come to this city and later return to their countries exclaiming about our city’s cleanliness, that itself motivates me to keep doing my work even better. The sky is the limit,” adds Vuganeza. 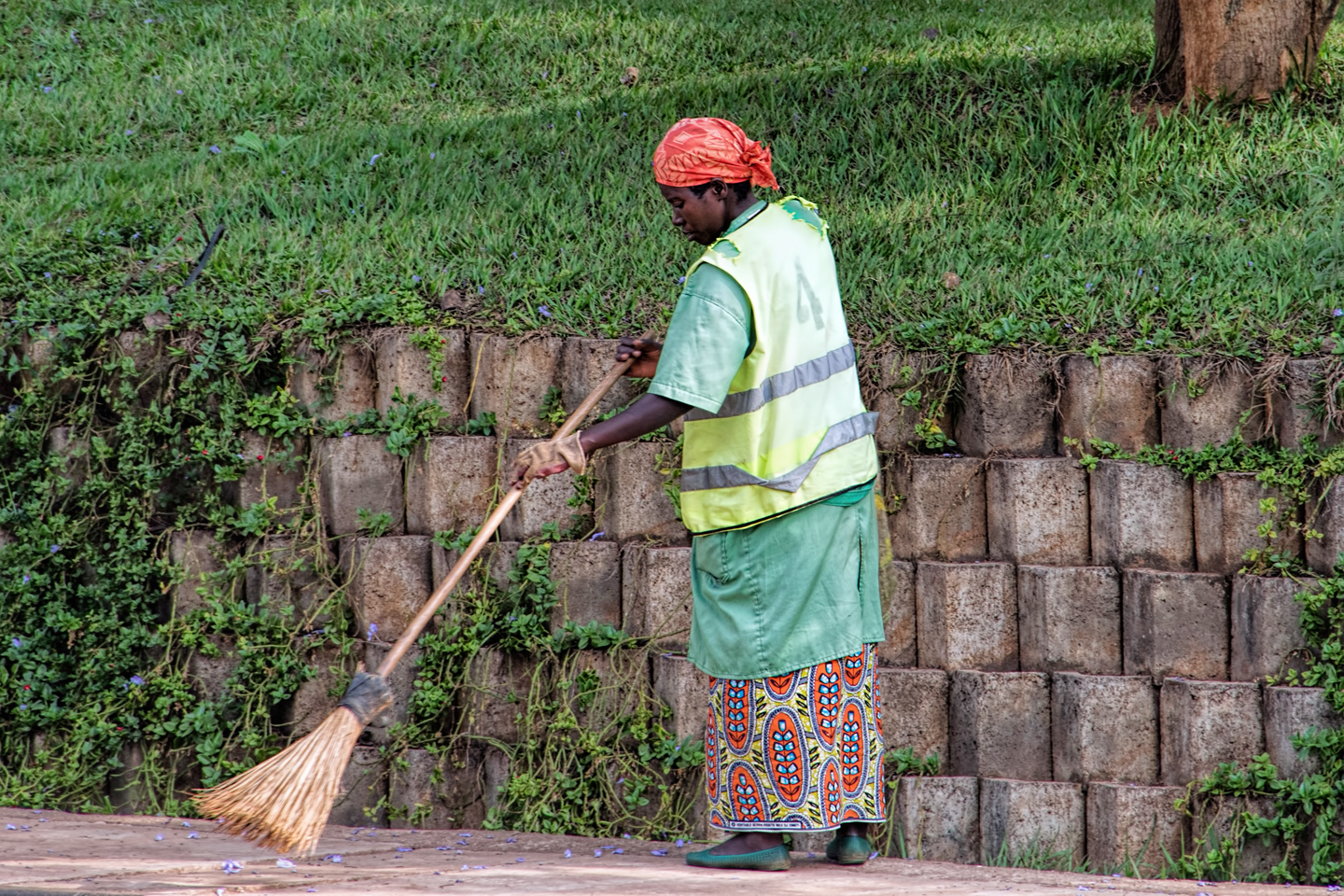 She takes any international praise heaped on the country as a direct compliment to her and her colleagues, on whose shoulders the responsibility squarely lies. Even with all the glowing praises, however, there is still room for further improvement, according to dative Dusenge, a cleaner based in Gasabo District.

“We have come too far, but improvements and more efforts in beautifying the city are still needed. So I urge my colleagues to swallow the pride and take an extra walk towards making the city cleaner,” Dusenge says. By urging fellow women to “swallow their pride”, she seems to be alluding to the fact that there is not a lot of money to be made from this otherwise noble job. For her part, she has been able to cope with this low pay by regarding the job as a duty to the nation.

According to the Mayor of the City of Kigali Pudence Rubingisa much as efforts to keep Kigali clean and green are paying off, there is no room for complacency in attaining even higher standards in hygiene and sanitation.

“We shall continue investing our efforts in building the infrastructure, overhauling those that are substandard, and polishing those that are good to make them the best and attain international standards,” Mayor Rubingisa said.

He added that to instil the values of cleanliness and hygiene, awareness campaigns have to be taken to primary schools. “Our children have to grow to respect the culture of cleanliness, and as we tread the path of restoration of dignity, cleanliness is a high-value principle that must be emphasised,” he reckons.

“We should all understand that cleanliness is a virtue that benefits all; the residents, the visitors, the business community and investors. Just as President Kagame has often reiterated; we do not need any aid to keep our backyards clean’; we should all be inspired by that philosophy and continue minding about cleanliness right from the heart,” he added. 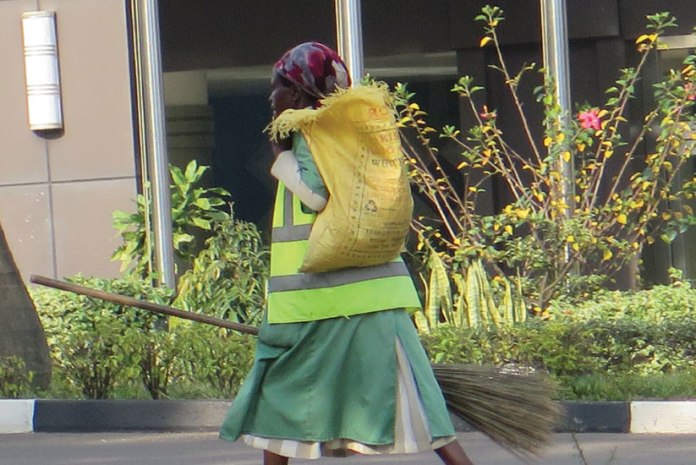 Kigali’s population had grown to 1.2 million inhabitants from a community of 6000 people in 1962 when Rwanda gained its independence. Despite 70% of the capital Kigali being rural, the most significant part of the population is relatively young – going up to about 60% of the 1.2 million, according to statistics from the City of Kigali.

The increased population growth of the city prompted the authorities to draft laws protecting the cleanliness of the city whereby, If you are walking on any of Kigali city streets and throw an empty bottle, urinate on the roadside or throw mud while walking or knock palm trees, beware of hefty fines.

According to the official gazette nᵒ 46 of 14/11/2016 in its chapter three on the ‘Hygiene along roads’, every road of the City of Kigali must; always be clean, gardens must be planted in its surroundings up to six meters and must be well maintained.

The policy directs that no waste storage along the roads and there must be a cleaning company to ensure the maintenance of cleanliness. The policy also says it is prohibited to throw any waste on the road; urinate or spit on the road or walk on the grass along the route. “Offenders face Rwf10, 000 in fines.”

Concerning damaging palm trees, the policy directs that any person who causes damage, hits trees such as an ornamental tree, palm tree, tuya tree, filao tree, Arocaria tree and others of a garden or other infrastructures must pay damages.

Under these instructions, the policy says, in a bid to replace the damaged items in the public garden and other infrastructures, a replacement cost must be paid and is between five hundred thousand (Rwf500, 000) and one million (Rwf1 million) francs for replacement.

Coping With Covid: A Guide To Managing Mild Covid-19 Disease At Home