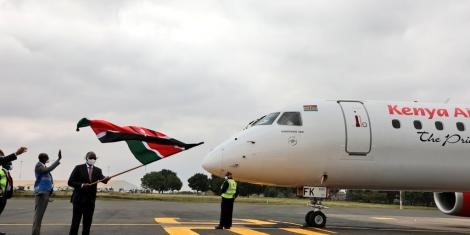 On Saturday, Jomo Kenyatta International Airport was very busy after Kenya Airways resumed the international flights heading to 30 destinations for the first time since the routes were suspended in March due to the coronavirus pandemic.

The first flight to Addis Ababa Ethiopia left JKIA at 4.05 a.m. while the first to touch down in Kenya was RwandAir from Kigali at 11.30 a.m. By 10.00 a.m five flights had already left Jomo Kenyatta International Airport to Dubai, Addis Ababa, Kinshasa and London.

Earlier on Kenya had announced that it will start with 27 destinations. Speaking at the JKIA while flagging off a plane en route to London, Allan Kilavuka, the Chief Executive Offer for Kenya Airways said that they had to increase the destinations due to demand.

“We announced we are starting with 27 destinations, we increased it to 30 just the following demand,” Allan Kilavuka, the airline’s chief executive officer, said during a ceremony ahead of seeing off a flight to London.

However, Kenya Airways was not able to fly to Tanzania following the escalation of a diplomatic row that led Dar es Salaam to block flights from Kenya on Friday. KQ had already planned a flight to Tanzania on Saturday, but the turn of events led to its cancellation.

But even as this happened, the Kenyan government is still not revealing the true position of diplomatic relations between the two countries with Foreign Affairs Chief Administrative Secretary, Ababu Namwamba insisting that all is well.

“There is absolutely no diplomatic issue between Kenya and Tanzania, we have a fantastic diplomatic relationship. We continue to engage continuously. There is engagement at the very highest level, between our two Heads of State, there is continued engagement between our foreign ministries in Nairobi and in Dares Salaam,” he said.

The Cabinet Secretary for Transport, James Macharia retaliated that flights from Tanzania have not been banned. We have not banned any country from coming into Kenya. We have not closed the airspace, what we have done is have quarantine measures imposed on some countries based on assessment risk,” Macharia said.

This minor issue has been sorted out and we believe that if not today, by tomorrow we shall find Kenya Airways flying again to Tanzania,” he said.

CS Macharia explained that the ‘safe flights’ list issued on Friday does not mean that those excluded are banned from operating flights to Kenya. “It would be inappropriate to start discussing individual countries because we have a total of 180 countries but so far only 19 have been listed as having their travellers exempted from quarantine,” the CS said.