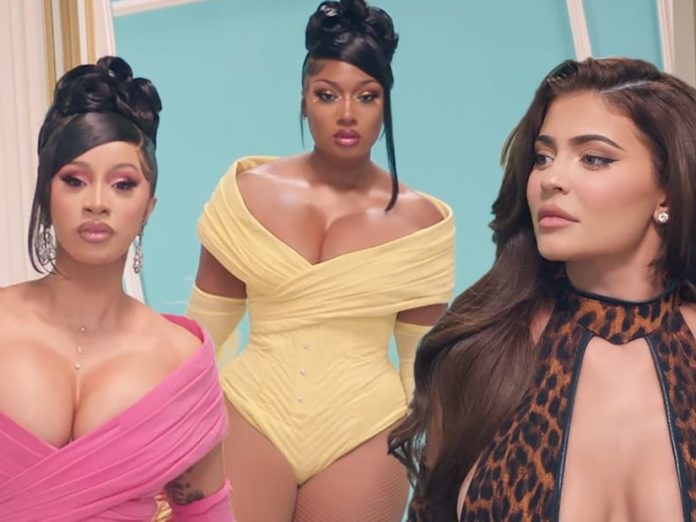 Cardi B and Megan Thee Stallion on Friday finally dropped their music video ‘WAP’ after a week-long teasing on social media platforms. The music video that has already garnered hundreds of thousands of views saw Kylie Jenner the lipstick mogul making an appearance among other celebrities.

Kylie’s cameo came in during interludes in the WAP music video where the Keeping Up With Kardashians strutted through the corridors of the grand house wearing a leopard-print suit and matching thigh-high boots. Kylie encountered real leopards before walking into a leopard themed room with a lavish golden door knocker.

The lipstick mogul slowly opened the door before throwing her signature sultry look back at the camera. However, the video that was set in a lavish bungalow decked with statues of Cardi B and Megan received mixed reactions online immediately after its release.

The fans wondered why the rap queens decided to feature Kylie Jenner over other African beauties including Kylie’s former best friend, Jordyn Woods.

One fan commented, “So when did Kylie do the cameo? Before or after meg got shot? Cause she unfollowed meg, endorsed Draya after Draya made a joke of it all, hasn’t wished meg any luck with her injuries. they really could’ve used sweetie or Jordyn.”

Another user said, “I enjoyed the WAP video. Bright and colourful and wholesome. Educational. But why the Kylie Jenner interlude? No one asked for that.”

The other stars who featured in the WAP music video included Normani, Rosalia, Rubi Rose, Sukihana and Mulatto.

South Africa Loses 2.2 Million Jobs in Second Quarter of 2020 Due to Hard Lockdown