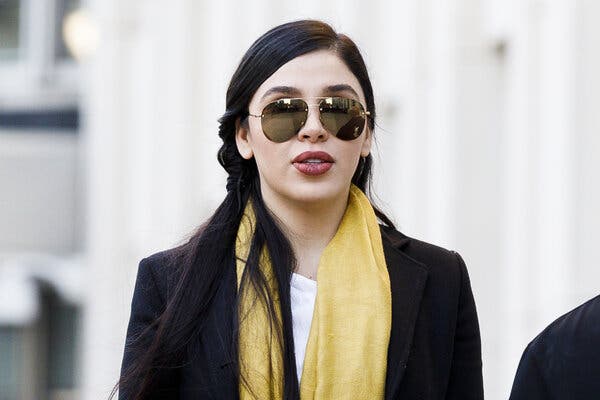 WASHINGTON, United States— The wife of Joaquin “El Chapo” Guzman Loera, leader of a Mexican drug trafficking organization known as the Sinaloa Cartel, was arrested on Monday in Virginia on charges related to alleged involvement in drug trafficking, the U.S Justice Department said.

She is scheduled to make an initial appearance in federal court on Tuesday in the U.S. District Court for the District of Columbia via video conference.

According to court documents, Aispuro is charged with participating in a conspiracy to distribute cocaine, methamphetamine, heroin and marijuana for importation into the U.S.

Additionally, Coronel Aispuro is alleged to have conspired with others to assist Guzman in his July 11, 2015 escape from Altiplano prison, located in Almoloya de Juarez, Mexico.

After Guzman, now 63, was re-arrested in Mexico in January 2016, Coronel Aispuro is alleged to have engaged in planning yet another prison escape with others prior to Guzman’s extradition to the U.S. in January 2017.

Guzman Loera was convicted by a jury in the Eastern District of New York in 2019 for his role as a leader of the Sinaloa Cartel.

The FBI’s Washington Field Office is investigating the case.

A criminal complaint is merely an allegation and all defendants are presumed innocent until proven guilty beyond a reasonable doubt in a court of law.

The beauty queen and daughter of alledged senior Sinaloa Cartel was married to Mr. Guzmán when she was a teenager and is believed to be Mr. Guzmán’s third or fourth wife.

Guzman was convicted of trafficking tonnes of drugs into the United States as Sinaloa’s leader and sentenced in July 2019 to life in prison plus 30 years, which the sentencing judge said reflected Guzman’s “overwhelmingly evil” actions.

Guzman was sent to ADX Florence in Colorado, the US’s most secure prison.

The arrest of Ms. Coronel could add new friction to U.S.-Mexico relations. It comes months after the October arrest in Los Angeles of Gen. Salvador Cienfuegos, Mexico’s former defense minister, as he and his family arrived on a family vacation.

A month later, U.S. officials dropped charges after Mexico complained that it had been kept in the dark about the U.S. investigation and threatened to cut off anti-drug cooperation.