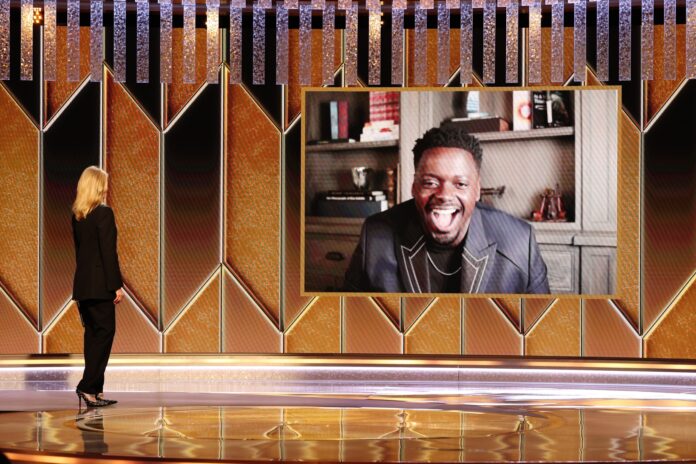 UNITED STATES— The 78th Golden Globe awards got off to a rather shaky start as Daniel Kaluuya’s winning moment almost got ruined due to technical glitches when delivering his speech.

The British actor won for best-supporting actor in a Motion Picture— Drama for his role as American activist Fred Hampton in Shaka King’s Judas and the Black Messiah’.

While accepting the first award of the night, it soon became clear there was a fault with his Zoom connection after Laura Dern announced his name.

As Daniel unknowingly continued his silent acceptance speech from his home, presenter Laura is seen cringing side of the stage before letting out a nervous chuckle and apologising for the ‘bad connection.’

The broadcast then cutaway from Kaluuya – but the actor could suddenly be heard again, exclaiming: “You’re doing me dirty!”

“Am I back on? Alright cool,” he added before starting his speech from scratch.

The star joked: ‘You did me dirty’ before adding ‘I’ll save all that for the HFPA’—referencing the recent controversy surrounding the Hollywood Foreign Press Association’s lack of Black members.

32-year-old British actor then gave a typically charismatic address, in which he praised Fred Hampton’s family as well as his co-stars Lakeith Stanfield and Dominique Fishback.

Judas and the Black Messiah follows FBI informant William O’Neal (Stanfield) who infiltrated the Illinois chapter of the Black Panther Party to gather intelligence on Hampton.

The Award was conducted Semi-virtually on Sunday 28 February, with Tina Fey and Amy Poehler hosting the modified ceremony due to the pandemic, which pushed back proceedings by two months.

Both hosts performed their duties from separate cities, on opposite coasts. Fey was in New York at the Rainbow Room, a famous venue located at 30 Rockefeller Plaza (an address also known as 30 Rock, after which Fey’s sitcom was named). Amy Poehler hosted from Los Angeles.

The majority of award nominees are beaming in via Zoom which we all know is prime for tech blunders — case in point being the very first gong of the night.

Daniel Kaluuya wins the award for Best Performance by an Actor in a Supporting Role in Any Motion Picture at the #GoldenGlobes! pic.twitter.com/hrZDCk3uwR