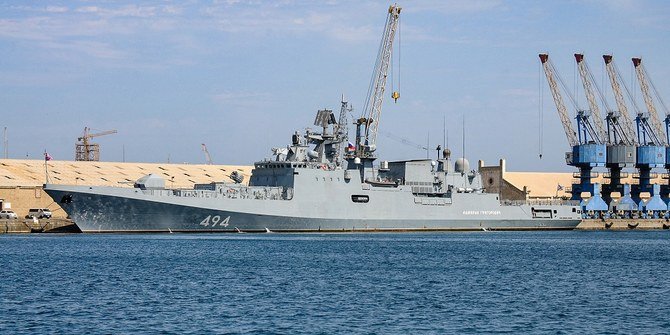 SUDAN— The United States and Russian warships have entered a Sudanese port where Moscow plans to build a naval logistic base on Sudan’s Red Sea coast.

The arrival of the US guided-missile destroyer USS Winston S. Churchill to Port Sudan comes days after An expeditionary fast transport ship, the USNS Carson City, docked in the port on Feb. 24, the “first US navy ship to visit Sudan in decades,” the U.S. embassy in Khartoum said in a statement at the time.

It “highlights the willingness” of the U.S, military to “strengthen their renewed partnership” with Sudan’s armed forces, it added.

The arrival of the USS Churchill was “the second (U.S.) ship to stop in Sudan this week,” said U.S. Charge d’Affaires Brian Shukan.

Meanwhile, the Russian warship, the Admiral Grigorovich frigate is the first to enter the Sudanese port.

Russia announced in November a deal that outlined a “logistical support center” to be set up in Sudan where “repairs and resupply operations and rest for crew members” can take place.

The naval facility’s capacity will be capped at 300 military and civilian personnel and four ships, including nuclear-powered vessels, according to the details published on the Russian government’s website.

The base will stand on the northern outskirts of Port Sudan. Russia will also gain the right to transport via Sudan’s ports and airports “weapons, ammunition, and equipment” needed for the base to function.

The deal is slated to stand for 25 years—as long as neither party objects to its renewal.

Moscow has in recent years turned its eyes to Africa as it renews its geopolitical clout.

It has wooed Sudan with military and civilian nuclear cooperation, signing a deal between the countries’ armed forces in May 2019 set to last seven years.