He has released a statement today confirming he is the father and also apologized for lying that the child was his niece.

“I wish to confirm that yesterday (Wednesday) paternity results were issued that confirmed that I am the biological father of the child. The results confirm that, in 2013 (which was before I got born again and married), I sired Abby.”

“I know this news comes as a shock to many of you who follow and watch us. I also know that my public comments about this matter gave a false impression which I deeply regret,” stated Kabi.

Three months ago, Kabi had denied being the father of the child, Abby, after a photo of the supposed woman accusing him of abandoning their child made rounds.

Reports claim that Kabi received a letter from a lawyer demanding him to pay Ksh. 181,895 for child support.

“The lady you see in this picture is my cousin and the baby we took this picture with is called Abby, she is my niece. How can someone say you are the father of your cousin’s child?” Kabi captioned in a post

Few hours after his admission, Kabi’s wife Milly wa Jesus who is also a vlogger, said that the news has been difficult for her accept.

She captioned, “Guys as you can guess, this has not been easy. But you know, life is never easy. I understand that we all have a past. And sometimes that past is tough and hard to understand. But I am also a mother, and I know that every child needs love and support from the parents. As a mother, I will do all that is possible to assist my husband to support Abby, and to make sure that she integrates into our family.” 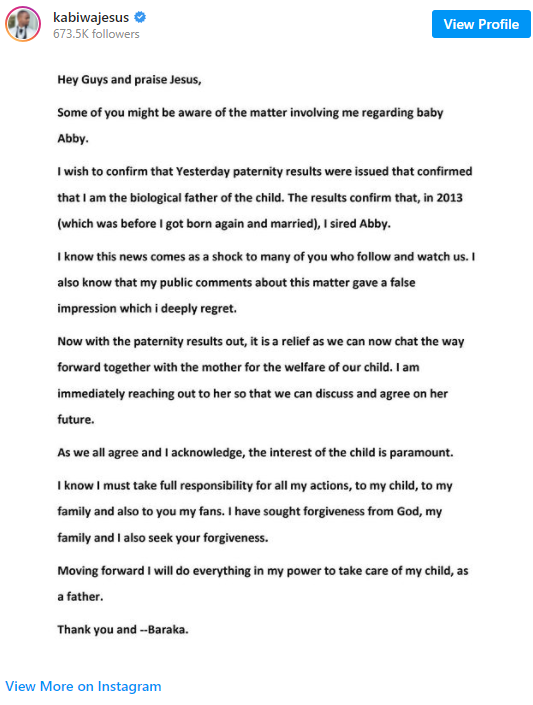