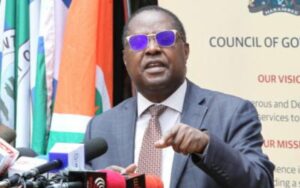 NAIROBI, Kenya — The Council of Governors (CoG) has issued a warning threatening to shut down counties in two weeks if the National Treasury fails to release Ksh. 102.6 billion owed to counties.

Speaking on behalf of the governors, CoG chairman Martin Wambora said the delay has crippled county operations thus critical services will not been offered.

“Unfortunately, if the National Treasury fails to release the funds, counties will not be able to offer basic services thereby forcing suspension of services or total shutdown by June 24, said Wambora.

Wambora added that the treasury in its mandate has not only failed to comply with the constitution but also with its own-document cash disbursement schedule for 2020.

The constitution, through article 19 stipulates for a timely disbursement of the equitable share of revenue.

According to the governors who reiterated that financing counties is an obligation, counties like Nairobi have not received funds for a period of six months.

“Today is June 14, ten days remaining to the closure of this financial year. In this regard, the National Treasury should release the funds by June 18 to offer counties the remaining eight working days to satisfy the stringent requirements by the Controller of Budget in accessing and spending the funds.” He added

Governor Wambora stated that counties will be unable to clear their pending bills amounting to Ksh.11.5 billion as directed by Treasury Cabinet Secretary Ukur Yatani during his Thursday budget speech if the funds are not disbursed to the devolved units.

“We appeal to the Senate, the custodian of devolution, to support counties in this call for timely disbursement as the law provides for efficient service delivery. Operations across counties are currently paralyzed,” he said.