GHANA — Shatta Wale has recently been engaged in disagreements with several renowned people including Davido and journalist Asamoah – Baidoo. The dust has not yet settled, yet he is at it at it again. This time, he has created another beef with Deputy Prime Minister Designate Mark Okray.

The Ghanaian artist seems to be irked following Okray’s appointment as Deputy Minister. According to the artist, the latter has nothing to offer to the Creative Arts Industry since he has been a key player in the industry for years.

“For years we have been watching you, if it is nonsense talk, you have it. If they go take you Nonsense Deputy Minister we like it … but don’t try Creative Arts. If Mark Okraku Mantey becomes Deputy Minister then there will be war”

“There will be war in the music industry, they shouldn’t come and try that thing. I swear everything like it won’t be easy,” said Shatta Wale in a video

While addressing the Appointments Committee, Okray responded to the artist saying that people in the creative arts industry are opinionated.

“The creative space is an opinionated one and it is so because by the DNA of a creative person, you must be anti-status-quo and so most creative people cannot be gagged, they will definitely voice out when they have to.

“But we need everybody on board and so we are going to engage even those who do not believe that we can do it and together we would do it.” He said

Responding to the artist’s infamous call for Ghana to sell High Life as a music genre, Okray said highlife still has presence in the country.

“We still enjoy highlife, we are still producing highlife but it is in a different form for the youth of today. It will be difficult for highlife to die, because most of the music we listen to today, even the dancehall, or other genres of music, they all have the rudiments of highlife.”

The vetting was attended by celebrities including Samini, Wendy Shay and Kuami Eugene among others. 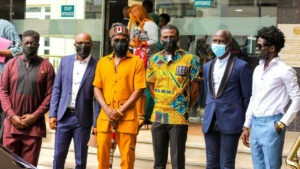