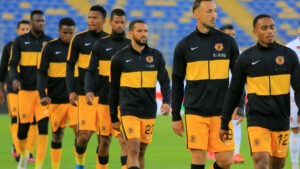 South Africa— Sources indicate that Kaizer Chiefs a south African local team, has made one more decision in which they consider final on a senior player contract situation.

Ramahlwe Mpahlele, Kaizer’s defender and midfielder still has the opportunity to stay put in the club given that the club has an option to lengthen his contract deal for another one year. Though at the moment signs show Ramahlwe, the veteran defender has signed a shorter contract.

Kaizer chiefs club stood in limbo when a contract of ten of its players expired at ounce end of last month, however, because of indoor agreements, mercy prevailed in the club, and players like Mpahlele reconsidered options in the previous agreements.

The lagging in Chiefs making a call on their future and broadcasting it has been caused by the CAF champions league final next weekend in Morocco.

Chiefs are timetabled to face Al Ahly in Morocco on July 17, and all signs tell that the team manager Stuart William has preferred focusing on preparations for the massive game rather than players jumping up and down. Despite the FIFA ban being officially lifted at the start of this month, Amahosi is yet to do give confirmation of their newly recruited players.

Therefore, Kaizer Chiefs have offered Mpahlele and Parker a short-term contract until the end of July with an expectation of engaging both players on new contracts at the end of the champions league.

Willard Katsande a midfielder and goalkeeper Itumeleng Khune are expected to retain their positions in the team for the next one year, as their manager Baxter gives a clear report of the out of contract players.

Sources indicate that for now, that the prime concern is to have a full quota of enrolled players ahead of next weekend in Morocco.