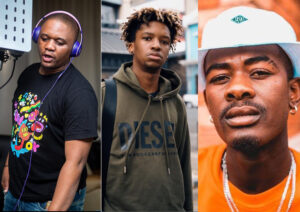 The three died while going for a gig in Rustenberg where they were scheduled for a performance.

Though details on the exact cause remain sketchy, people are speculating that alcohol might have played a part in the fateful accident.

Killer Kau whose real name is Sakhile Hlatshwayo, gained fame after one of his videos went viral on twitter. In it, the 19-year-old performs his single Thol’ Ukuthi Hey, which became a hit.

Mpura recently took over the amapiano genre, after being part of collaborations that shook amapiano lovers releasing hits such as Umsebenzi Wethu and Khuza Gogo.

It was believed that Kabza De Small was with the two the night before the accident, leading to rumors that Kabza had also passed. However, Kabza in a now-deleted post took to his social media to assure he was fine.

The sad news of their passing was also confirmed by Entertainment Commentator Kgopolo Phil Mphela on Twitter who wrote:

“RIP: Amapiano artists Killer Kau & Mpura in fatal accident. Three lives from the industry are cut short with the passing of Killer Kau, Mpura and Khanya Hadebe. Earlier tweets about Kabza being one of the fatalities were false.” – Kgopolo Phil Mphela.

“Didn’t know Mpura personally but I, along with the rest of Mzansi, knew his work and the evident work of ethic. Delivering hit after hit, putting amapiano lyricists on the map. I send my condolences to his family and to his friends who knew him and have lost a brother,” said musician Zano.

rikyrickworld wrote on Instagram, “Painful💔💔💔 @illuminated_greens GONE TOO SOON 😢 Im so sorry. You were just starting to figure this life thing out and we were so happy you guys were starting to grow into yourselves. DAMN, this one just doesn’t make sense to me. You were too young to go like this brother. Its hard to have faith when we lose the best ones like this. F**k. THE VOICE. WE LOVE YOU YOUNG”

Other artists who have tweeted tributes to the two include Amapiano Mr. JazziQ, Uncle Vinny and Lady Du.