‘Jerusalema’ singer Nomcebo Zikode recently revealed that she was welcomed in Miami, Florida in the US in a Huge Way.

“Being honoured by the city of Miami 🇺🇸. Commissioner Wardson and @joecarollonow honoured me on my 1st visit to America, to the state of Florida and to the City of Miami. I was then declared as a distinguished visitor and presented with the keys to the city 🏙.” She wrote on Instagram.

“I am so grateful to receive such a prestigious welcome from the city and to see how proud they are of an artist who comes all the way from KZN, South Africa and sings in isiZulu 💚🥰”

In the video clip shared by Carollo, Zikode, who’s at present on a world tour was seen educating the youngsters the favored “Jerusalema” dance strikes.

“Today, the City of Miami is honoured to welcome Nomcebo Zikode on her first visit to America, to our state Florida and to the City of Miami, we welcoming her little Havana and declaring her a distinguished visitor,” said Carollo.

A few weeks ago, the South African singer announced that she would be making a guest appearance on reality TV show, Love and Hip Hop.

“Guess who’s gonna be on the biggest show of America: VH!’s Love & Hip Hop … With the producer Mona,“Nomcebo wrote. 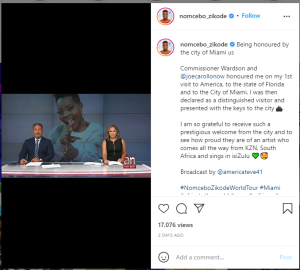