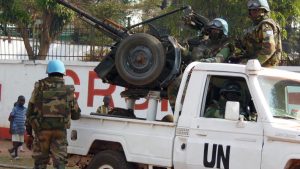 The Central African Republic released four French soldiers from the UN peacekeeping force in the country on Thursday, according to the mission. Their arrest had triggered UN outrage.
“The four MINUSCA personnel members who were arrested… at Bangui airport have just been freed,” the mission’s chief, Mankeur Ndiaye, said on Twitter.
The four soldiers who were detained at the airport on Monday were members of the elite French Foreign Legion with French, Romanian, Bulgarian, and Italian passports.
The three had gone to escort MINUSCA’s military leader, General Stephane Marchenoir, who was flying to Europe, according to the French Embassy and the UN.
However, claims quickly spread on social media that they were planning to “assassinate” President Faustin Archange Touadera, charges that coincided with a spat with France over Touadera’s use of Russian paramilitaries.