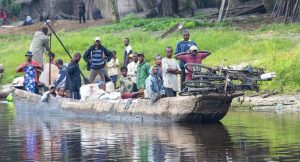 A vessel caught fire at the Ngafura Port on the Congo River in the Democratic Republic of the Congo, killing at least 20 persons and badly burning 11 others.

Didier Tenge, the Interior Minister, informed a local radio station that the Sunday accident occurred at 13:00 local time on the outskirts of Kinshasa.

The injured are being treated for third-degree burns at a nearby hospital.

According to a member of the local provincial parliament, the vessel was filled with combustible materials and was traveling upstream to Équateur province.

Deadly boat accidents are common in the Democratic Republic of the Congo, with many documented events on the Congo River, often blamed on overloading and poor conditions.

In January 2022 anothe accident claimed at least 55 lives when an overloaded boat sank on the Congo River in the northern Mongala province.